Knox County, Maine (Map It) was created on March 9, 1860 from parts of Lincoln County and Waldo County. This county was named in honor of Henry Knox (1750–1806), the first United States Secretary of War (1789 - 1794), who lived in Thomaston, Maine.Learn More About State of Maine History

MapGeeks.org has is a collection of old Maine maps. 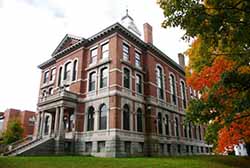