A DeKalb County, Illinois General Highway Maps includes County, City and Township maps which contains detailed information about roads and boundaries, these maps may include rural communities, churches, and cemeteries. 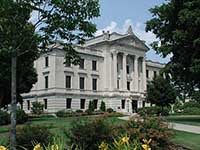