A Map of Union County, Georgia contains detailed information about roads and boundaries, these maps may include rural communities, churches, and cemeteries. 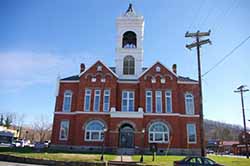