Washington County, Alabama (Map It) was created on June 4, 1800 as a county of the Mississippi Territory. Its area originally contained 26,400 square miles. The area of Washington County was later divided into 16 Mississippi counties and 29 Alabama counties. Washington county was named in honor of George Washington (1732–1799), 1st U.S. President.

A Map of Washington County, Alabama contains detailed information about roads and boundaries, these maps may include rural communities, churches, and cemeteries. There is a collection of old Alabama maps at MapGeeks.org 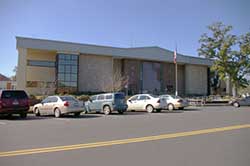 The Washington County Courthouse is located in Chatom, Alabama.