A Map of Jackson County, Alabama contains detailed information about roads and boundaries, these maps may include rural communities, churches, and cemeteries. There is a collection of old Alabama maps at MapGeeks.org 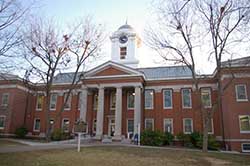 The Jackson County Courthouse is located in Scottsboro, Alabama. The act establishing Jackson County designated Sauta Cave as a temporary seat of justice. Bellefonte was the county seat from 1821 until 1859, at which time it was transferred to Scottsboro, which was named for Robert T. Scott, an early settler from North Carolina. There was record loss due to a courthouse fire in 1860 and 1920.