Southampton County, Virginia (Map It) was created in April 20, 1749 from Isle of Wight County. Part of Nansemond County was added in 1785. Southampton county was named for either Southampton, England or Henry Wriothesley, 3rd Earl of Southampton, one of the founders of the Virginia Company. 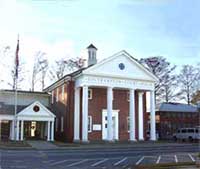 The Southampton County Courthouse is located in Courtland, Virginia. The first courthouse was built in 1752 on the east bank of the Nottoway River where the present courthouse now stands. The current courthouse building is the latest of several which have served the county. It was constructed in 1834 and extensively remodeled in 1924. Later a new county office building was added in 1960.

The Southampton County record dates below are from the earliest date to present time. They may include records of land, estates, taxes, vital records, divorces, naturalizations, voter registration, military discharges and court records.