Bedford County, Virginia (Map It) was created in December 13, 1753 and was formed from Lunenburg County. Part of Albemarle County was added in 1754 and part of Lunenberg County was added later. Parts of Bedford Co was used to form Campbell County (1782) and Franklin County (1786). Bedford county was named for John Russell, 4th Duke of Bedford, British politician and one of the head negotiators of the Peace of Paris. 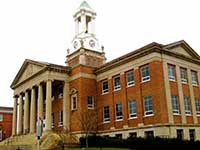 The Bedford County Courthouse is located in Bedford, Virginia.

The Bedford County record dates below are from the earliest date to present time. They may include records of land, estates, taxes, vital records, divorces, naturalizations, voter registration, military discharges and court records.