Florida Court records cover a broad range of genealogy subject areas that can help you as part of your research, such as land ownership, courts, taxes, and naturalization’s.

Given that Florida court records cover such a wide selection of topics, they could aid you in many different ways.

Many Florida court records can be found at both the Florida State Archives and the FHL.

Available records include, but are not limited to Land, Vital, Probate, Soldiers and Sailors Discharge Papers, Naturalizations, Guardianships.

From 1763 to 1821 the federal government kept records pertaining to the acceptance or denial of the validity of Spanish land grants. Those records can be found at the Florida State Archives.

Those records are the only primary records listing information about residents who lived in the area before it became a territory. The documents are indexed, but the content in each one varies quite a bit. Generally, they list the size of the family, when the person or family moved to Florida, and the names and ages of the individual or family members.

The number of “heads” of family would often determine how many acres of land were granted. Land grants are slowly being converted and placed online by the Florida State Archives.

Although the original records still exist, they are fragile. Also, most of them are written in Spanish. A 5-volume transcript of those records, called Spanish Land Grants in Florida, was published by the Works Project Administration (WPA).

It includes Private Land claims, as well as British Grants and Spanish Grants. Many libraries have copies of the collection on file, as does the Florida State Archives.

On August 14, 1842, the Second Seminole War came to an end. At that time, the federal government approved the Armed Occupation Act. That act granted land to men who were willing to take up arms to defend it against Indians.

The act was first proposed by a U.S. Senator named Thomas Hart. Each man could apply for 160 acres of unsettled East Florida land. However, they had to agree to cultivate and live on that land for a period of at least 5 years.

Permits to settle the land were issued. They list the name of the applicant, when the applicant moved to Florida, a description of the land, and the marital status of the applicant. Many scanned images of the original permits can be viewed on the website of the Division of State Lands.

the rectangular survey system is used in Florida. Original plats and field notes, as well as grant records and tract books, have been transferred to the state. Millions of land transaction records have been placed online by the Florida Department of Environmental Protection (DEP), Division of State Lands, Board of Trustees of the Internal Improvement Trust Fund Land Document System.

Their search engine can help researchers to look up specific land documents according to county, township, range, section, and other descriptive information.

Land entry case files from before July of 1908 have been compiled as part of “The Seven States Index.” those records list the land office, name of entryman, and file or certificate entry, as well as the type of entry.

The National Archives publication Preliminary Inventory of the Land-Entry Papers of the General Land Office publication contains more information on records from 1825 onward.

The Florida State Archives holds 1881 to 1905 homestead applications. Those applications include:

A surname index for those records is also available. That collection includes tax receipts and other related records as well. Some of those records are State Land Office correspondences from 1858 to 1913 and legal records. See Also Guide to U.S. Land Records Research

Probate records from the state of Florida may include a number of different documents. Some of those documents are Wills, Intestacy Administrations, Bonds, Inventories and Appraisements, Guardianship’s and Property Divisions

the clerk of the courts in each county now holds probate records, which used to be kept in the probate courts. Most counties will provide those records for easy research. In the 1970s, the FHL also microfilmed several probate records.

To this day, original records and new indexes are being listed online all the time. See Also Guide to U.S. Probate Records Research

Researchers can learn a lot of information from tax rolls, especially those that were taken in non-research years. Most counties have held onto their own tax rolls. However, many tax rolls from 1829 to 1881 were compiled and transferred to the Florida State Archives.

Those tax rolls generally list white males over 21 (taxable age), names, land, wagons, horses, slaves, and other personal property. That property may have included anything from carriages to watches and jewelry, as well as unusual items, such as musical instruments.

The microfilmed collection of tax rolls from 1829 to 1898, which can be found at the Florida State Archives and certain libraries across the state, contains a lot of useful research information. Researchers should note that the information contained in that collection is incomplete and some years offer more information than others.

On July 1, 1862, the Internal revenue Act was passed. It was meant to “support the Government and to pay Interest on the Public Debt” (12 Stat. 432). Those assessment lists for the years of 1865 and 1866 can be found on microfilm at the National Archives.

During that time, almost all items became taxable items. Therefore, those lists can offer valuable information about an ancestor’s net worth and lifestyle.

Tax assessment lists and tax rolls, poll tax records (on free white males aged twenty-one and up) are helpful, as are listings of local lawyers, physicians, and dentists.

Personal property tax records have been published for a few counties. Tax lists, along with other sources, are being used to reconstruct the lost 1890 federal population census. See Also Guide to U.S. Tax Records Research 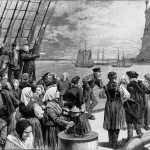 Many of the early Florida settlers came from other states, especially Georgia. There were were not many immigrants coming to the area from other countries in the early days.

Immigration records at the few existing seaports were not really recorded until the 1800s and 1900s. However, NARA has some records that are extant. Researchers should check the National Archives for those records.

Florida’s U.S. district courts and county courts hold records of naturalization’s. Researchers should check the courthouse in question to see what records are available.