Morgan County, Alabama (Map It) was created on February 6, 1818 from land acquired from the Cherokee Indians by the Treaty of Turkeytown of 1818. Morgan county was named originally named Cotaco for a creek that flows through it. On June 14, 1821, the name was changed to Morgan in honor of Gen. Daniel Morgan (1736–1802) of Virginia, a hero of the American Revolution.

A Map of Morgan County, Alabama contains detailed information about roads and boundaries, these maps may include rural communities, churches, and cemeteries. There is a collection of old Alabama maps at MapGeeks.org 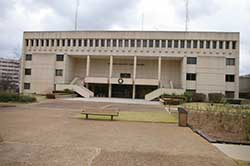 The Morgan County Courthouse is located in Decatur, Alabama. The County Seat was at Somerville from 1818 until 1891. Then it was transferred to Decatur, named after Stephen E. Decatur, hero of the 1804 Battle of Tripoli. There was record loss due to a courthouse fire in 1926 and 1938.

The following dates indicates what vital, land, probate, and court records are in Morgan county. The date listed for each record is usually the earliest registration filed. The date does not indicate that there are alot records for that year and does not mean that all such events were actually filed with the clerk.