Powhatan County, Virginia (Map It) was created in June 03, 1777 from Cumberland County, Part of Chesterfield County was added in 1850. Powhatan county was named for the Powhatan tribe. 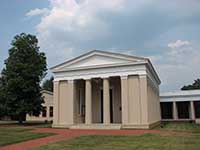 The Powhatan County Courthouse is located in Powhatan, Virginia. The first courthouse was built here about 1783 and around it grew the village of Scottville. Named for Revolutionary War Gen. Charles Scott, who was born in the area, the town eventually became known as Powhatan Court House. The present courthouse was designed by Alexander Jackson Davis, of New York, and built in 1849. It is a masterpiece of Greek Revival architecture. The oldest building in the court square is the clerk's office built about 1798 and nearby is a late-18th-century double-galleried courthouse tavern. Part of the Confederate army, retreating from Richmond, passed here on 4 Apr. 1865.

The Powhatan County record dates below are from the earliest date to present time. They may include records of land, estates, taxes, vital records, divorces, naturalizations, voter registration, military discharges and court records.