Northampton County, Virginia (Map It) was created in 1634 and was one of the original eight shires. The County originally called Accawmack County but was renamed in 1643 . Northampton county was named for Northamptonshire, England . 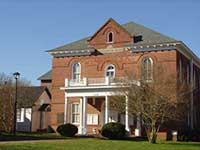 The Northampton County Courthouse is located in Eastville, Virginia.

The Northampton County record dates below are from the earliest date to present time. They may include records of land, estates, taxes, vital records, divorces, naturalizations, voter registration, military discharges and court records.