Washington County, Kentucky (Map It) was created on June 2, 1792 from Nelson County. The county was named in honor of George Washington, President of the United States (1789–1797) .

A Map of Washington County, Kentucky contains detailed information about roads and boundaries, these maps may include rural communities, churches, and cemeteries. 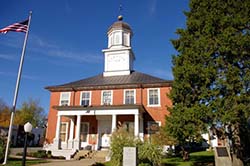 The Washington County Courthouse is located in Springfield, Kentucky. Two fires, one in 1795, and the second in 1814 destroyed courthouses, though some records were saved. Learn More About State of Kentucky Court, Tax, Land and Probate Records.