The State of Pennsylvania name means “Penn’s woods.” The name is rooted in the name of Pennyslvania’s founder William Penn and the Latin word for “woods” which is “sylvania.” This name was specified in the charter for the land given to William Penn by King Charles II in 1681.

Pennsylvania’s state nickname is “Quaker State” and is also referred to as the “Keystone State.” This term was apparently first used because of the state’s political importance, though it is also appropriate because of its location in the middle of the 13 original states. With six states to the north and six to the south, Pennsylvania was the keystone in an arch of states. The State Motto is “Virtue, Liberty, and Independence”

One of Pennsylvania’s outstanding characteristics is its great diversity. In southeastern Pennsylvania, Berks, Lancaster, York, and Chester counties contain some particularly fertile soils. Dairy products, poultry and poultry products, cattle, nursery and greenhouse products, and grains are especially valuable. Central and northern Pennsylvania contains extensive areas of commercial forest. The state continues to be an important industrial state, though there has been a dramatic shift to service-based employment. Especially in western Pennsylvania, many smaller communities as well as Pittsburgh are no longer the flourishing centers of manufacturing that they once were.

Such national shrines as Independence Hall, the Liberty Bell, Valley Forge, and Gettysburg are in the state and are constant reminders of Pennsylvania’s importance in the history of the United States.

Henry Hudson first explored the Delaware River, which led to the Atlantic Ocean. That led to the Dutch people establishing trading posts in Pennsylvania. In 1638 the Finns and the Swedes came to the area, many of them settling where Philadelphia now is. At the time the area was known as New Sweden, but the Dutch took it over in 1655. It was then known as New Netherland, until 9 years later, when England took it over and it became part of the territory of the Duke of York. That territory also included New Jersey, New York, and Delaware. The Dutch regained control of the area in 1673 and kept it until 1674, but then the English took control of it again.

Of all of the early settlements in the area, William Penn’s colony had the most impact on Pennsylvania as a whole. In 1681 it was chartered to William Penn, but he didn’t arrive to govern the area until the next year, aboard a ship known as the Welcome. Penn was a Quaker and was given his charter by King Charles II. At that time several Quakers from England immigrated to the area, along with Irish, Welsh, and Scottish immigrants. 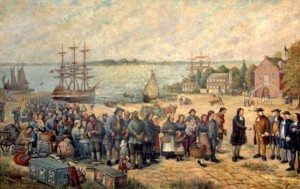 From 1692 to 1694 there was a conflict between the popular and proprietary elements, causing William Penn to lose his power and causing the area to become a royal province. However, the proprietary government soon regained control and things stayed that way until the American Revolution ended. Penn and his family line left a lasting impact on how residents of Pennsylvania dealt with religious freedoms, dealing with Native Americans, and systems of government.

Over the 100 years after Penn settled in the area, many immigrants came to settle there because of his “Holy Experiment.” The Scots-Irish, or the Ulster-Scots, came in 1707 originally. Many more of them came from 1728 onward. The Germans also began settling in the area in 1683. Many of them were from the Rhine and subgroups included Mennonites, Dunkers (Dunkards), Roman Catholics, Schwenkfelders, Reformed, Amish, and Lutherans. Collectively, they became known as “Pennsylvania Dutch.” The Pennsylvania Dutch originally settled in Germantown, which is part of present-day Philadelphia. However, they later spread out to other areas, including the counties of: Montgomery, Lancaster, Northampton, Lehigh, Berks, Lebanon, York.

Chester, Lancaster, and Dauphin counties were the original homes of the Ulster-Scots. They later began settling in Cumberland Valley as well. The southwestern part of the state was later settled widely by both the Ulster-Scots and the Pennsylvania Dutch. That occurred despite the fact that the Alleghany Mountains were obstacles to immigration, since they run diagonally through the state. Settlers often stayed in the valleys between those mountains. Such valleys included Lehigh, Cumberland, and Lebanon. In the 1700s several Welsh people came to the area, including some Welsh Quakers. Acadians and French Huguenots also came to settle in what is now Pennsylvania. As the 1700s came to a close, Haitian and French refugees also took refuge in Pennsylvania. African Americans, Irish, and Jewish people were also among the 1700s settlers. The Quakers opposed slavery in Pennsylvania, but it still existed. However, over half of the African Americans in the area were free as of 1790, and by the early 1800s there was no more slavery at all in that part of the country.

Western Pennsylvania settlers mainly started out in the province’s eastern section. However, some of the settlers did come from Virginia and Maryland, including Germans and Ulster-Scots who had left Pennsylvania to go south in earlier years. Pennsylvanians and New Yorkers met in the northwestern part of Pennsylvania, in the territory of the Holland Land Company. Many of those Pennsylvanians were migrating to the north from southwestern counties, including Allegheny, and Washington.

It is historically believed that the Native Americans and the Penns got along fairly well and that new land was acquired from the Native Americans via purchases and treaties. However, there are certain historians who think that relations may not have been that friendly. Soon, settlers began pushing westward, causing the Native Americans to be displaced. That led to the French and Indian War breaking out, which in turn led to the creation of the first militia in Pennsylvania. It was the militia’s job to defend settlers on the frontier from Native American raiders.

In the 1750s, the northeastern part of Pennsylvania was claimed by Connecticut and Connecticut settlers began moving into the area. That caused a conflict, which was not resolved until 1782, when the Decree of Trenton was enacted. Virginia and New York also had some disputes with Pennsylvania over boundaries. However, the biggest conflict was between Lord Baltimore and the Penns. In 1739, a temporary boundary was drawn between Maryland and Pennsylvania. However, it took until 1769 before Charles Mason and Jeremiah Dixon established the Mason/Dixon line. That line later became the line between the South and the North in the battle over slavery. Pennsylvania was a major keystone in that conflict, since several major events occurred in Philadelphia. In fact, in an effort to show democracy, the state’s charter referred to Pennsylvania as a “Commonwealth.” 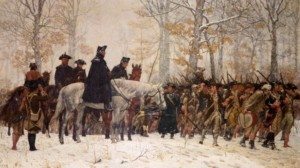 In 1776 the British defeated the patriots in Germantown. The winter of 1777-1778 was extremely harsh and George Washington’s army spent it holed up at Valley Forge. The War of 1812 saw Commodore Perry being victorious on Lake Erie, thanks in large part to the Pennsylvanians. In 1792 the “Erie Triangle” was bought from the Native Americans, and it later became Erie County. That gave the state a significant water port on Lake Erie. Pittsburgh, Pennsylvania is also a Pennsylvania port. It is located on the Ohio River. A major Civil War turning point for the Union army took place at Gettysburg Pennsylvania, which marked a historical event for the area.

Many of the mid-Atlantic states, including Pennsylvania, experienced a lot of growth in the 1800s, thanks to roads, canals, and railroads. That expansion led to a lot of immigrants coming to Pennsylvania, including: Irish, Germans, Italians, Poles, Scandinavians, Russians, Slovaks.

The Commonwealth experienced major industrial growth around that time and African Americans who were moving north, as well as all the groups mentioned above, participated in that development. Pittsburgh and Bethlehem in particular were industrial hubs, thanks to steel production. The western part of the state, as well as Wilkes-Barre and Scranton, also had major coal mining industries. In the Northwestern part of the state, oil fields were also common.

There were several Native American tribes in Pennsylvania, including the Iroquois Five Nations, who came to the western region from New York. Also present were the Shawnee and Susquehannock along the Susquehanna River, as well as the Lenni-Lenape (or Delaware), who were located in eastern Pennsylvania.

There have been several publications relating to the three major immigrant groups in Pennsylvania, which were the Germans, the Irish, and the Scottish. Several Welsh people also immigrated to the area and many of their records have been published as well.

The websites below will provide state-specific details to those in search of information for Pennsylvania genealogy work.