Independent farmers were the main settlers in the eastern part of the state, which was heavily forested. It was an isolated region until the early 1900s. The western part of the state was more populated earlier on, thanks to the cotton plantations in the area. Commerce also thrived there because of the proximity to the Mississippi River. The central part of the state also had a diverse economy and some decent transportation connections to other areas allowing the population there to grow.

There were several Anglo settlements constructed in Tennessee in its early years. There were several conflicts over land rights with Native Americans. Native American treaties were violated on a regular basis at that time. Boundaries and jurisdictions were also constantly changing. Therefore, it can be difficult to trace Tennessee ancestors from that time period, but understanding some of those historical changes can make the process easier for researchers.

In the late 1600s and early 1700s Cherokee Indians lived in the eastern part of what is now Tennessee. Around that time explorers from Europe came to the area. Several Native American tribes used present-day Kentucky and Tennessee as hunting grounds. The region between the western and eastern parts of the Tennessee River was Choctaw Indian territory at the time. The lower Cumberland area was claimed by the Shawnee until 1714.

Sir Walter Ralegh (often spelled Raleigh) gave a large land grant to European settler in 1585, just before Roanoke was colonized. In 1756 and 1757 Fort Loudon was established by the British in Tennessee. It was located about 30 miles to present-day Knoxville’s south. In 1763, when the Seven Years War ended, France gave the region back to England. At that time, England established the Proclamation Line, which ran along the Appalachian Mountains. 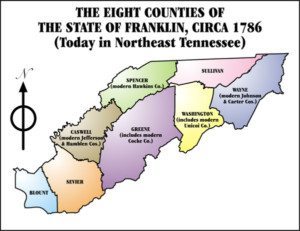 The purpose of the Proclamation Line was to move Native Americans to the west. White settlements were to stay to the line’s east. The hope was to reduce confrontations between white settlers and Native Americans, also reducing spending in the process. However, settlers kept wanting to travel farther to the west, despite the line’s presence. The existence of the Cumberland Gap enticed settlers to move through the mountains. That caused an increase in both treaties and battles. The treaties failed to stop westward expansion, as settlers from Virginia, North Carolina, and other areas continued moving west. So, with each new treaty, the Cherokee tribe was pushed out more and more to the west. Some North Carolina and Virginia settlers established a Watauga River settlement in 1769. Then, in 1772, they tried to create a system of self-government with the Watauga Association.

The Cherokee Indians sold land along the New River, Watauga River, and Holston River to the Watauga Association in March of 1775. The Transylvania Company started selling land between the Cumberland River and Kentucky River that same month. The Cherokee Indians had sold about 20 million acres of land to that company.

A colonial charter given to North Carolina stipulated that it have land “from sea to sea.” So, it claimed the land in many parts of what is now Tennessee. There were several disputes over that land and the government of it in the years that followed. The Washington District was created in North Carolina’s western territory, where eastern Tennessee is now, in 1776. It became part of Rowan County. In 1777 Washington County was created. It later became Burke County, but for only a few months. Then it stretched over much of what is now Tennessee as an independent county.

In 1779 Watauga settlers came to French Lick. There they founded Nashborough, which later turned into Nashville. They also created a system of government known as the Cumberland Compact.

The eastern and central portions of Tennessee drew small groups of trappers and hunters during the Revolutionary War because the soil there was fertile. Some of the early settlements then became permanent ones. Davidson County was organized in April of 1783. It covered the northern portion of the center of Tennessee. In 1784, after a lot of jurisdictional problems and complications recovering from the Revolutionary War, North Carolina ceded the land in what is now Tennessee to the United States government. However, it did keep some land to give to veterans that served for the state of North Carolina during the war. Also in 1784, Watauga Valley settlers created the state of Franklin because they were frustrated about not being accurately represented within the North Carolina governmental system. Franklin was never formally recognized, and it was dissolved 4 years later. However, before it was dissolved there were many conflicting claims there between settlers from South Carolina, North Carolina, and Virginia. Those claims were never properly settled. See Also The Lost State of Franklin.

Even though several treaties were signed, there were still many Native American conflicts in Tennessee. Treaty restrictions were not widely accepted by the Native Americans or the white settlers. The “Territory South of the River Ohio” was create by Congress in 1790. In order to become a state, the territory had to have at least 60,000 settlers. It reached that population level in 1796, making Tennessee the 16th U.S. state.

Several settlers came to the Tennessee frontier in its early days. Scots-Irish came down the Great Wagon Road from Virginia. Some also came via the Warriors Path. The area to Chattanooga’s west was settled by a group of Pennsylvania Germans. Other settlers came from the Cumberland Gap via Robertson’s Road into the middle of the state.

Several Tennessee residents served in the War of 1812. Many settlers also served in the Indian Wars that came later. The result of those wars were various treaties between the Native Americans and the white settlers that allowed the settlers to move further to the west. In 1818 west Tennessee was added to the existing Tennessee area by a Chicksaw treaty.

The northern border of Tennessee is shared with Kentucky. Ongoing border disputes between the two states were not resolved until 1820. At that time the Walker Line was accepted by Kentucky as the official boundary, but it was later found to be drawn north of 36? 30′ and that put it in the wrong area between the Tennessee River and the Cumberland Gap. In 1859 another survey finally settled the ongoing land disputes caused by the faulty 1820 survey. Since families who resided in the disputed regions didn’t officially belong to either state during the years of dispute, records from those families may be found in either state. Divisions of land and boundary changes may also impact the locations of records. The counties that may be impacted the most by those issues are: Stewart, Montgomery, Robertson, Sumner, Smith, Macon, Clay, Pickett, Jackson, Overton, Fentress, Scott, Morgan, Campbell, Claiborne

The Cherokees and the federal government created a new treaty in 1835. That treaty led to the Cherokees moving west, out of Tennessee. Any Cherokees who stayed behind were forcibly removed by the military in 1837 and 1838. They were moved into Oklahoma through Missouri along what became called the “Trail of Tears.”

Although many Tennessee residents supported the Union during the Civil War, in May of 1861 the state as a whole decided to secede from the Union. However, many men from eastern Tennessee chose to serve in the Union army in order to express their anti-secession opinions. Generally, residents from the west and middle parts of the state were in favor of slavery, since their plantations depended on slave workers at the time. The Confederate Army’s main base in Tennessee was at Fort Henry. It was located on the Cumberland, between Fort Donelson and the Tennessee River. In all, more than 400 battles occurred in Tennessee during the Civil War.

As of 1863, after several battles being fought, Union forces took control of the area around the Tennessee River. The infrastructure of the state suffered greatly during that time. However, in 1864 the government was recreated and slavery was abolished statewide the next year. In 1866 Tennessee ratified the 13th and 14th amendments and became the first state to rejoin the Union.

After the Civil War ended, many epidemics impacted the Tennessee area. As the state was reconstructed after the war, several new railroads popped up. The state then began recovering, both commercially and agriculturally.

The early 1900s was a time when the Tennessee Coal and Iron Company. That company was first owned by a bank in New York, but was later purchased by J.P. Morgan, a famous financier from that era. He owned the U.S. Steel Company. In 1911 that company was charged in an anti-trust case.

Around the time of World War I measures were put into place to keep the Tennessee River from flooding. However, the flood control system wasn’t completed immediately. In 1933, during the Great Depression, the government allocated funds under the New Deal to create the Tennessee Valley Authority, or TVA. The TVA finally completed projects that had been started, including one to use the Tennessee River to create power for the area. The TVA project also led to the Wilson Dam being constructed at Muscle Shoals, Alabama, along the border between the two states. Several areas were flooded by the project, but other areas were saved. The project created electricity, jobs, and industries in the area, which all revitalized the Tennessee economy. The project ultimately helped with the World War II war efforts and led to the end of the Great Depression.

The DAR Library and the National Archives each have microfilmed 1850 and 1860 federal census slave owner schedules on file. Some African American Civil War soldier records can be found at the TSLA. There are also several online resources that contain information on African Americans in Tennessee.

Oklahoma holds most of the records relating to Native Americans in Tennessee. The Bureau of Indian Affairs, Department of Interior in Muskogee, OK holds many of those records. Others can be found at the Oklahoma Historical Society. A map called “Aboriginal Map of Tennessee” shows the early white settlements, forts, and native tribes.

On October 19, 1818 the Chickasaw tribe ceded their lands in the western part of present-day Tennessee. In December of 1835 the Cherokees began leaving the region after the last of their lands were ceded. However, a few Native Americans did stay in the area. A collection called “The American State Papers, Class II, Indian Affairs” has been published. It details actions taken by the Native Americans in the region. It is located in the TSLA, but access is restricted. Register Number 11, a collection of Cherokee records, and the 1835 Cherokee Census are available to researchers.

The FHL holds the Guion Miller Roll (Eastern Cherokee Roll). Eastern Cherokees that applied for 1905 monetary awards are listed in those records. Those claims were maid as a result of a lawsuit filed against the United States by the Cherokees. The record is indexed and includes around 90,000 names.

The websites below will provide state-specific details to those in search of information for Tennessee genealogy work.